Stealing the Fantastic From History: Ancient Assyria, Star Wars and the Unending Well of the Creative

When you enter the front entrance on the southern end of the Seattle Art Museum, you are faced with a cascade of wide open stairs the color of tinted sand. Facing you as you approach are beasts, semi fantastical, large, hewn from stone and stained by age. The design and placement of the entrance and the facing of the statues reminds one of entering a  gate into ancient Assyrians between the iconic lamassu.

Lamassu of ancient Assyria at the Gate of Sargon II’s citadel excavation, Khorsabad

This would be incorrect, however. The beasts are not Assyrian, having heads of their own kinds instead of human.  You climb the stairs, passing through them, step by step, their eyes staring down on you. As a child, they intimidated me and brought a sense of wonder to the enter experience.

Over a decade later I returned. And I laughed, shaking my head with irony and humor as I climbed the same steps. The statues were ancient Chinese, possibly from the Tang Dynasty, my memory is several years old now.

Spirit Way at the Ming Xiaoling in Nanjing, China

In my worldly travels, I have walked the very paths upon which these statues would have been original erected. They stand on either side of Spirit Ways (Chinese: 神道; pinyin: Shéndào). They  never face towards the travler. Instead, they faced each other across the road, lined up, one after the other, like an honor guard.

So I did laugh and smile as I re-entered the Seattle Art Museum after my years of traveling abroad. The statues were Chinese, the choice of position Middle Eastern and the designer western. A collage of history and culture in the simple choice of a entrance design to a museum. As a historian, I felt the positioning was wrong and said so to my companion. As an artist, I could still feel the affect of the environment design and why it had been formed as it was.  Do I know for certain that the designers was referring to Assyria when he/she positions the statues as they did? No, I never had the chance to ask. I know that’s what was brought to my mind the first and second time I experienced it. It really doesn’t matter. There are half a dozen other cultures that could be said to have inspired the set up.

Upper part of the entrance of the Seattle Art Museum

We steal from history everyday. It is the well that informs our language, our learning, our philosophy. Like raiders, we plunder from it each moment.

Writers, creatives, artists, steal in different ways than everyone else. We plumb its depth for ideas. The entire steampunk genre is a beautiful example. Without the victorian era and the steam engine, it would not exist at all.

I steal from history every time I sit down to right. If I was writing Book Two of my Silence of Elysium series, my current work, seven hundred years ago in Europe I would likely be drawn and quartered, or possibly burned alive. It’s obvious that I’m ‘stealing’ from the history of the Catholic church. Aks me, I’ll admit to it. Is the Catholic Church in my work. Goodness, no! But concepts,  ideas inspired by the existence of a strong domineering religion with a strong attachment that it has the right to create concepts of ‘right and wrong’ are just sitting there in the pages history and as a storyteller, I play with them, like a child forms sand castles at the beach.

My chosen genre is fantasy. There is such a breadth and depth to what I can create inside of it, that I don’t know if I’ll ever leave, unless a very good story comes along that demands a modern setting. So far, every story I’ve wanted to tell could be told fantastically. We shall see.

Many writers will give advice to younger writers along the lines of, “If you want to write well, read.”

I heartily agree. I would add a caveat. “Read fiction and explore history if you want to write fantasy.”

There is nothing like climbing up the Great Wall of China and looking over the vales of gates and walls through a historical contested valley to inspire the creation of a city in a world that will never physically exist. 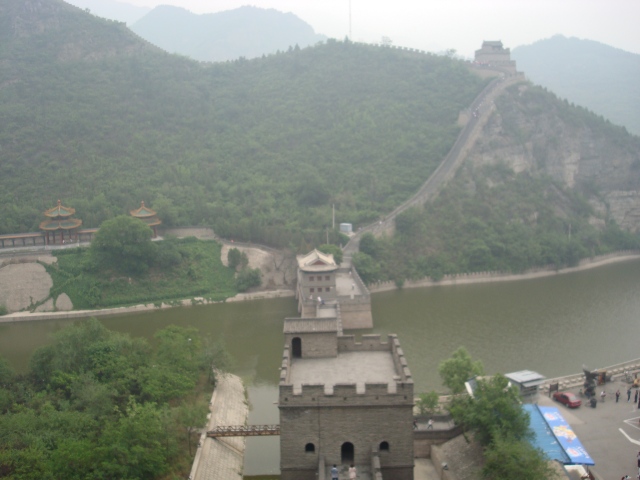 I took this photo of Great Wall of China outside of Beijing. The pollution got in the way of beautiful photography.

Standing at the top of Niagara falls will likely inspire water ways in my worlds for years to come. 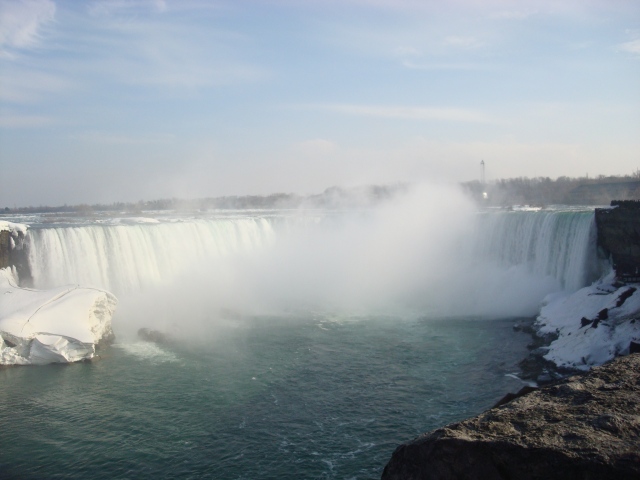 It was a cold cold day when I snapped this from the Canadian side of Niagara Falls.

Plumbing through texts on medieval Catholic reform and watching a religion change shape and strategy has informed my fictional political battles for pages. Learning of the Mamluks, bought slaves taken to Egypt and trained to be warriors and hold positions of honor, turned my modern concept of slavery on its head and allowed me to play with an increased range of human institutions.

The inspiration forgotten in the sands of time is greater than we can ever hope to drink.

I recently listened to Austin Kleon on the Self Publishing Podcast talking about two of his books, Steal Like and Artist and Show Your Work!. I’ll admit, I haven’t gotten my hands on his books yet nor do I have time to read them until my international move is finished. I fully intend to. David Wright positively ranted on the value of its message and anything that could make Dave that excited I want to read. During the podcast, Dave and Sean related on some flack they’d taken over a book that a reader or two claimed stole from the Hunger Games in one piece of the plot. I had to chuckle while listening. Hunger Games, whether intentionally or not, built on the Japanese novel Battle Royale, in several key points. I love both stories. In my mind however, Battle Royale stole some concepts from 1984. 1984 stole from history itself, from book burnings and the tyrannical actions of emperors sand kings centuries over.

Ideas build, warp, even turn on their heads, like Chinese Communism going from equality for all to grim subjugation of the masses to the will of the Party and then incorporating Capitalism with Chinese Characteristics. Each creative artist or policy maker molds and shares a bit of their soul with ideas and concepts that are larger than his or her own life. We can only add our own brush strokes to stories and the release the muse to the winds of culture and time.

History is an amazing, practically unending well from which to reap material for the fantastic.

For each medieval European artifact that has been written to death, there are dozens of others yet unexplored. There have been some forays into telling stories tinted with Asian colors but African and the Middle east are so far, untouched in the general stream of genre work. There are so many societal constructions to be played with, foods to be tasted, architecture to be tried and religions. Granted, some may be so different from the western mind that exploring them in English genre fiction would be less than economical on the author’s time. Did you know there is a people group who keep their dead in their homes and refer to them as ill for years, before funeral preparations are completed, or another culture that has corpse cleaning ceremonies? Can you imagine a fictional account of the end of Easter Island as food sources ran low?

One of the reasons I believe I will always come back to my love of Star Wars is just how talented the costumer designers and character developers were at plundering history and cultures for art, blending ideas from that well and forming entirely new worlds. Consider this costume for Queen Amidala against this one of a geisha from Japan. See the line of the wrapped kimono in both and the obi, the belt like cloth around the torso? Stealing from history. Brilliantly, in my opinion. Queen Amidala was dressed for imagery and being a living icon. Some of her other outfits also contain hints of Japanese influence, as well as imperial China and India. 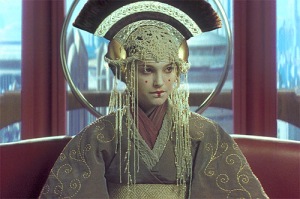 A Maiko in Japan

I would not mind at all if some of the styles displayed on Corosant found their way into modern fashion. Those Jedi outfits look a lot more comfortable than a suit! I want to trade up. Actually, on our wedding day, my husband did. He wore traditional a summer kimono and hakama. The last thing he wanted to be running around in all day was a stuffy suite.

That aside, we all play with history, whether we real it or not. Being intentional with our thievery can give us a greater depth and keep those ideas flowing for years to come. It also gives the reader who catches on to your stolen treasures that zap of pleasure and connection when they realize what you’ve done.

I am not saying research. Personally, it rarely works for me to do any research. Hunting through Pinterest or Google images when I’m trying to get an idea I already have clarified is about the limit of what I do. But I do keep a list of history podcasts on my iPhone for long walks and traveling, as well as a stack of books by my bed. Jared Diamond’s Guns, Germs and Steel was amazing in terms of world creation concepts. The following tome, Collapse, also by him, would almost write a post utopian novel by itself.

However you choose to fill your creative bank and stage your plunder expeditions, make sure you’re enjoying it. For me, that’s traveling to historic sites, feeling the architecture beneath my fingers, eating the local food and smelling the air in strange new places. Hitting the titans of museum art like the Metropolitan Museum of Art in New York or any of the Smithsonian collections also rank very high on my list. When I can’t do that, it’s well written books, and excellence podcasts like In Our Time from BBC Radio that feed the fire. For you, it might be something else.

7 Responses to Stealing the Fantastic From History: Ancient Assyria, Star Wars and the Unending Well of the Creative