Modern Myths: The Active Audience, Imagination and Why I Love Fanvids 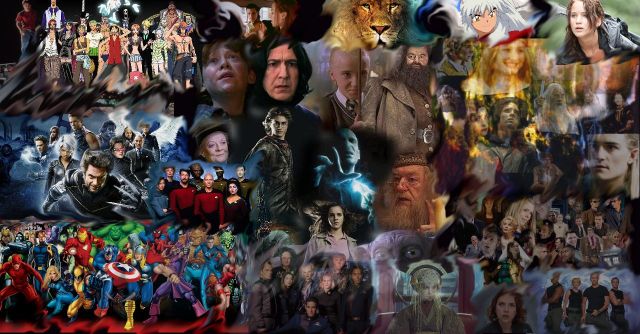 Stories are alive. As long as they are read, watched, discussed, they live on in the hearts and souls of every one they have touched. Th author has little control once the tale has flown from their fingers, it grows, spreads, changes, speaks for passions not even considered by the original creator. Sometimes the tale even collides and molds with other stories. Historians of literature have watched this happen through the centuries with myths. Today, the process is faster on orders of multitude. Sometimes it is only a matter of days before a tale has taken on a life of its own, transformed by the imaginations and viewpoints of those it entrances. Books, movies, and music no longer belong singly to their creators, as if they ever have. They live through their audiences and they grow and change through them. Like the gods of old, our modern myths are both our adored heroes and slaves to the whims of our mortal fantasies.

Most writers I speak to these days are at least aware of fanfiction, one of the largest examples of original tales bending to the will of the audience. If you can give me a better term for these stories clapped between a front and back page and published by a recognized publishing house, please, give it to me. The longer I stare into the maw of history, the more I see almost every work as simple a fanfic of one before it.

Some of the writers I know have even read or dabbled in fanfiction themselves. No matter what you think of it, it is here to stay for the foreseeable future. I’ve written before about fanfiction and some of the good things I see in it, like the works of Lyn Gala and the highly entertaining Xanthe.

In acknowledgement of the other side of the argument, there is plenty of fanfiction not worth reading. I would hazard a supposition, on the side,  that it is still worth the writing for the creator and as such holds value of a limited influence. Most writers have a manuscript we will never share, lying around somewhere. We must create to learn, like children tracing dotted lines, learning to draw the alphabet. The wonders of the internet being what they are in this century, we don’t have a pause button between write and post as kids. Derision is not the answer. Move on, click on something else to read or hit Kobo or Amazon up for a read. The best will rise to the top, eventually. My own experiences in the fanfic world as a reader is that the best get recognized.

What I have not yet heard much conversation over is fanvids. And I would be remiss not to share with you. Some of these works are truly pieces of art. Consider one of my favorite works.

Together…or not at all | Amy/Rory [The Doctor]

This piece was edited by Pteryx and posted to Youtube. It is beautiful. Please, if you just skipped over, go back and watch. Everything else afterwards will make much more sense. I’ll wait.

Powerful, wasn’t it? If you haven’t seen that season of Doctor Who, maybe not as powerful, but still, you understand. Somewhere beyond simple words.

Fanvids do something that is very difficult to do in any other medium. It takes body of work, sometimes a massive one, and distills it into senses, triggers and musical cues that creates the coffee equivalent of expresso of the heart. Sometimes it even augments the original work, adding music and highlighting underlying story lines that might have been missed by a casual viewer. Reading the comments after these vids and you will see that they touch people.

So why am I talking fanvids on a blog that usual discusses writing and genre fiction?

First off, if someone ever makes a fanvid of your book, be honored. It took them hours of work, time, and consideration to slice those frames together, find pictures and music, rip audio, whatever they used. I’ve worked with video production and editing/production is hard work, requiring effort and requires a level of skill just to use the software. A fanvid of your book also free publicity that was not generated by you. You have a FAN.

Secondly, watching fantods is an excellent way to study what moves your audience. Why do they like a character? What made them cry? What stuck with them and highlights the moment? What dialog, delivered correctly, meant everything? As a writer, what moments of fanvid gold are you creating?

“I asked you to stop being dead”

Sometimes it’s not even dialog. Fanvids also come without it. And can still be very powerful. If there is every a way to learn how to ‘show don’t tell’ watch fantods and study what they’re showing.

This is an excellent example. I have not see the series but I can still enjoy this fanvid. It still speaks to me on a guttural level.

You call them sacrifices

It’s a touch of the fingers on the edge of the skin.

A ceiling fan twisting, round and round.

A circle in the dust.

And overwhelming ‘mood’ from the underlying sound track.

And a title that anchors the entire work. Titles often mean everything because they set expectations. They also make the casual wanderer click on it.

We are watching the evolution of our modern myths. With the speed of digital media, sites like fanfiction, free blogs, Youtube, and Deviant Art, more creatives than ever, true amateurs, talented and less talented, are involved in this global conversation of what touches their hearts, inspires their minds and feeds their imaginations. Stories and universes like Harry Potter, Star Wars, Lord of the Rings Twilight, the Avengers, X-Men, Naruto, Star Trek, and others are the canon of our modern mythology. We’re already retelling it to each other, recycling the characters in our own imaginations, reveling in the moments that make us feel something.

Why not learn from it? Enjoy it?

Each of us has a story, a character that is more real to us than most people we meet. We are inspired by others.

I’m inspired by fanvids. What inspires you in the cross meetings of the other arts?

Thank you to the talented Pteryx for allowing me to use her videos in this post. Out of the fanvid artists I’ve run across online, her work is probably the largest and best I’ve seen. Not an expert here, but there are so so videos and then there are excellent ones. Pteryx falls in the latter category. You should definitely check out her channel.

Nod of the head to Joanna Penn and Austin Kleon for reminding me of the T.S. Elliot quote.

*All photo credits in the collage at the head of the article belong to the various companies by which they were produced. I only creative mixed them for full effect.

8 Responses to Modern Myths: The Active Audience, Imagination and Why I Love Fanvids