If You Give a Person a Special Person, they’re probably going to need…

So, after Valentine’s Day….

I’ve been on the advise-offering end of relationship conversations for years, I think, because I can listen very well, for hours, especially if I’m sipping vodka. That, and I keep a leprechaun in my basement, making me luck. Knyght and I have been together for ten years now. That leprechaun is worthy ever bit of his salt. He works hard!

Anyway, even at the bottom of the fourth drink of the night, most people don’t actually want advise, but rather a listening ear. Keep that in mind. I’ll get back to it. So, mostly, I just listen. Or tell people what they’ve already told me they know they need to do.

Now that that’s out of the way,  let’s read a bedtime story!

And, if they want to keep that someone else…

…they’re going to need to COMMUNICATE!

There is nothing more important to staying in a relationship and staying happy than communicating. Not just any communication will do. This is not Princess Bride. I’m with the girl in the movie on this one. Saying “As you wish”, doesn’t necessarily tell anyone that you love them. You need to SAY IT! Let’s go gentle on real life and stay with fictional characters to help illustrate.

I had the idea for this post really late at night and sat on the floor next to the bed typing. Knyght was playing video games after a long day. I craned by head back and said, “Knyght, what couple in fiction communicates like us?”

He thought for a second and said, “Sherlock and Watson, from BBC.”

He went back to his video game. Right now, as I finish this post, he’s watching Deadpool with my best friend in the theaters. I may have orchestrated that…shush.

Sherlock often presents Watson issues and enjoys displaying his brainpower to Watson. Watson grounds Sherlock in the realm of common human emotions and reactions that operate outside the realm of logic. They talk…all the time. Even if it’s Sherlock shrieking on his violin and Watson snorting through his nose and bouncing on his toes with his hands in his pockets. The eye contact, the twitch of an eyebrow, the nervous hand twitches. It’s why we love to watch the two of them together in the latest BBC serials and it’s also one of the reasons that long term pairings last in the real world. You don’t need to be equal across the board, but you do need to communicate and negotiate across the inequalities.

If someone is communicating with another someone, they going to need TIME. This isn’t Sleeping Beauty. No one wakes up and falls into long term bliss. Short term, perhaps, but not decades of committed peace and happiness. And the communication has to extend throughout the time. Think of Amy Pond and Rory. They talked and shouted and waved fingers in each others faces, but they were communicating, bit by bit, over the decades. They didn’t actually get together until they were doing that. Remember that scene when Amy tells Rory he’s gay? Also, saying “It’s you, stupid,” will probably not work for most people. Ok, it MIGHT work. It’s all in the delivery and the timing.

Just for because it’s too precious not to share…again.

And if someone is going to spend time with someone else,  they’ll need a little MUTUAL ADMIRATION.  Not worship! Just respect, is enough. According to science, contempt is one of the best sign of future divorce or breakups. Two couples that come to mind in TV of that last decade that last through the years are Gwen Cooper and Rhys Williams in Torchwood, Delenn and John Sheriden in Babylon 5. Especially Delenn and John went way out of their way to understand each other. What are some of your favorite long term couples?

And if they’re going to go on enjoying mutual admiration and having it last…make sure it’s backed up by some AUTHENTICITY. I mean, even Mr. and Mrs. Smith couldn’t lie to each other all their lives and that was their job, right? Has anyone else watched that movie three or more times? Or is it just me?

There, that’s it. I’m all Valentine’s Day’ed out. Falling in love has to be one of the more painful things you can do in your life, fair warning. It’s a lot of work! Real work. And Communication.

But so worth it…. 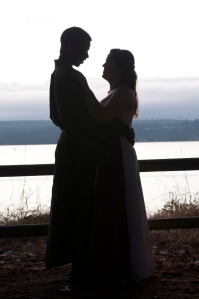 So chow down on the chocolate, hamburgers, toss off some wine or soda, because we all have some calories to burn. I mean, if you give a mouse….you get the idea. Anyway, back to that listening ear, here’s mine. Leave notes in the comments. What are your favorite long term couples? What makes them work? What annoys you about relationships in fiction? Or you wish you could see more of?

Photo of couple: owned by author