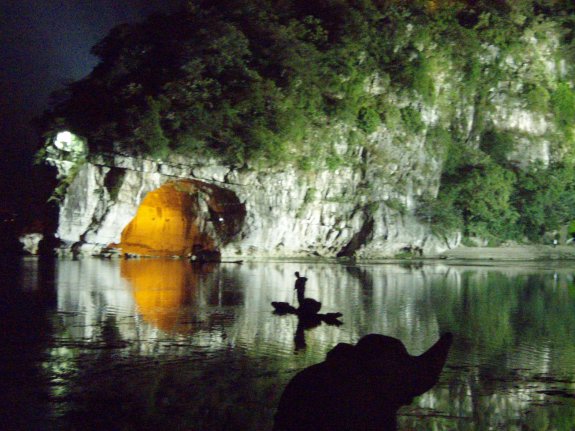 The following is a short essay in the form of a story based on my travels. All the places mentioned here are place I have been. Everything, except the conversation, are taken from things that happened in life. I found that wrapping these ideas up in a story worked better than writing an essay. Feel free to debate, discuss and ponder. Photographs were taken on sight or in the region by author.

“You want to understand why,” the man said, “but you don’t. You don’t want to understand. That’s the problem with answers. Once you get them you don’t want them. They change the questions. And the truth….you want the truth, you say. That’s a whole different pile of garbage, because there isn’t such thing…to say at least. If you find truth….well ….you know it. When you find, you know it, and there isn’t a man or woman in this world that can say it. Words just don’t cover something ineffable like… truth.”

Mariah shifted in her seat. The Li River was moving slowly between its banks past her right shoulder and behind her lights lit up the Elephant Cave’s ancient poetic inscriptions. She clutched her purse in both of her hands under the table and reminded herself to sit up straight. The man across the table from her gazed vaguely into the distance. He sighed heavily and raised one gnarled hand with a green bottle of beijiu* to his lips. “Young ones like you shouldn’t have to deal with things like truth,” he said. The bottom of the bottle slid upwards, reflecting back the lights from the river. His Adam’s apple moved like a dingy on the tide and he dropped the empty bottle onto the table. It joined its wasted brothers on the man’s left. A waitress appeared with another, already opened, and he took it wordlessly.

“How young are you, anyway?” he said.

“I wasn’t asking for the truth,” she whispered. “The lie everyone else knows would work, for now.”

The man paused in the act of bringing the fresh bottle to his lips. “But if you know it’s a lie,” he said, “would you be satisfied?”

“Not today, but maybe someday, it would be enough,” Mariah said.

“And if I told you the truth…”

“You already said you can’t, words can’t…say it,” Mariah said.

“You want to know why he’s here,” the man said.

Mariah nodded, more like jerked her head. Her tight curls barely moved and her lips pursed lightly. It was her eyes that gave her away, large, framed in brown and blue like a summer sky.

“I can’t tell you, but I can show you,” the man said. He shoved himself to his feet and yelled at the waitress. “Fuwuyuan!”*

The waitress appeared with a plastic plate and a slip of paper covered in scrawled hanzi. The man dumped currency on the table and shuffled towards the door.

“I can’t say that this won’t change you,” he said. “I’m not promising to keep you safe. Just like that book says, you pay the price, for knowing. An’ usually…you level that cursed price on yourself.”

Mariah nodded, another nervous jerk of her head. The man muttered in Mandarin and started down the sidewalk.  There were animal cages in front of many of the restaurant, filled with rabbits, snakes, hamsters. Some of the restaurants had large tanks filled with different species from fresh and salt water sources, including one lone octopus. Mariah shivered as she passed it. There was a variety of chickens, ducks and other types of fowl that Mariah couldn’t identify. Desperately, Mariah told herself not to look the fuzzy bunny rabbits in the eye.  She’s heard of people who became vegetarians out of pity for animals. The pork from her last meal was coming back to haunt her with large doe like eyes and fuzzy imitations of Wilber from Charlotte’s web. It was her favorite book in grade school and Mariah was wondering now why she had ever been able to eat pork since.

The man turned off from the restaurant street, crossed over a bridge and then through a gate. There was another bridge to cross after that and then steps down to the water. The man stopped at the edge of the water and pointed outwards.

“You ever wonder where things come from?” he said.

Mariah gave her signature nod, but when he didn’t say anything else she realized he hadn’t seen her. “Yes, sometimes,” she said.

“Look down into the water, been here as long as the earth itself, moving flowing, rising like steam, boiling in a volcano, freezing in a blizzard, laying for a thousand years inside a glacier, been here forever, right?”

“So whenever you touch water, you’re touching history, right?”

“You’re touching something that has touched something that has changed life. Maybe this water that you’re watching now fell as rain when Hannibal was marching against Rome. Maybe some of this water washed away the blood from sweating slaves marching towards their fates on the slave ships in Northern Africa. Maybe some of it was even there, when Mohammad’s fourth wife marched against her enemies, a small, highly prized bit of mist on the hot sands.”

“Why are you telling me this?” Mariah said. Her voice wavered slightly. 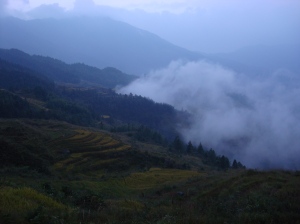 “You think you’re alone in the world, right? That you’re one person, all belonging to yourself, single, differentiated, autonomously yourself and only yourself, the boundaries of your physical body clearing defining the limits and uniqueness of who you are and that you are you and no one else is you and you are no one else.”

“It’s a lie,” the man said. “You aren’t just you anymore than this water is just water in the Li River. All of history is flowing down this river, from all over the world, just like all of human history is etched into you. Doesn’t matter if you’re conscious of it, anymore than it matters if the river is conscious of everything in it. You drink water, you drink the past. You eat a carrot, you eat a form of the soil that the carrot comes from, soil that forms the lives of trees and plants and animals and people that have decayed and become the soil. You are a product of the past, and you can never get away from it. Not if you want to live.”

“Don’t expect understanding,” the man said. He pulled a cigarette out of his pocket and lit it. It glowed dully against the deepening darkness of the night sky. “’Expected you to listen. Said words couldn’t say truth now, didn’t I? Just ‘cause you don’t understand, doesn’t mean you stop listening. That’s a problem these days, with people. They won’t listen to stuff they don’t understand, so they never understand nothing more than what managed to crawl into their brains from the back door when they weren’t lookin’.”

“If you knew you were like the river, with all of history running through you, but no one else knew, how do you think that would feel? If you had all the love and passion and pain and grief from all of history running through you, like the Elephant Cave over there does, scraping at you, tearing pieces of you away and leaving pieces of itself behind but no one else could see, and no one else can understand, as you slowly change and crumble and become someone else that no one accepts and no one understands and they keep asking where the old you is, but that person…that person is so far gone you can’t even clearly remember and you can’t make it stop and couldn’t, wouldn’t…ever…make it stop…but the pain of the rejection…and the look in the people’s eyes who say they’re your friend just keeps building and building….what would you do?”

“You came, asking for the truth,” the man said.

“No.” Mariah twisted her hands around her purse.

“You said you wanted truth. So does he.”

“What truth is here, why does he need to be here for truth!“

“It’s not ‘here’ that has truth,” the man said. “It’s any place but the place he came from that has truth. Any place where the one that was him before has never been.”

“Because we don’t know him,” Mariah whispered.

“You do know him. Like you know anyone on the street, or any piece of grass, or particle of water in the river, or air that has been breathed a thousand timed and cleansed a million more in the forest.” The man paused and drug slowly at his cigarette. “That’s how you know him. That’s the only way you know him.”

“Is like the animals and plants that died and decayed to feed the carrot. He’s the carrot. Everything that was fed into him, but he is not that which was.”

Mariah stared at the water. “I think you killed me,” she said.

“No, didn’t kill you,” the man said. “I killed the girl that sat down across from me in her shiny pink shoes and her perfect brown suite. The girl I’m talking to was just born. Expect she’ll die shortly, and there will be someone else wearing those shining shoes, if that person even likes them.”

“If I died, then why am I still feeling the pain that the one you killed felt?”

“Because you’re the carrot. You’re alive, but only because of death. So parts of everything that died to make you, is still in you.”

“You don’t now,” the man said. He stood up straighter, took off his hat and combed his hair back behind his ears, looking Mariah straight in the eyes, “but someday, if you die the right deaths and get born in the right births, you might.”

“You’re….him.” The words left Mariah’s mouth in a breathy whisper.

The man smiled, a little bitterness, a little wisdom in his eyes.

“I’m not big enough to be the river.”

“And I’m not small enough to be a carrot.”

Mariah smiled. “I think I’m dying again,” she said. There were tears on the edge of her voice

“I don’t know….like… living, for the first time.” Mariah laughed.

“Shall I tell you something true?” the man said.