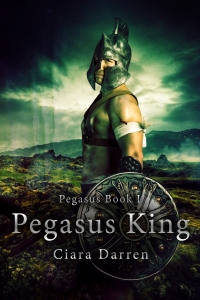 Available at Kobo and Amazon.

Mercy at the hands of the Pegasus King is not expected.

And mercy the broken young King Andros will not receive.

On his knees before Kaden, the warrior and king of the Pegasus throne, Andros, the young and defeated king, descends into darkness. Beaten and used for the pleasure of his uncle’s henchmen, he has little but his soul left to give as he defies the gods who damned him with blood and blade. The line between battle, passion, and desire becomes blurred beyond return. Though Andros is prepared to give his kingdom wholly to the ascending king to save his people, Kaden demands more.

With Andros as his oathsworn, Kaden, the Pegasus King, rides a dark horse into a world of regicide, secrets, and lies in pursuit of the younger warrior king who dared to resist him and then had the courage to bend the knee before him.