Prince of Ravens by Hal Emerson 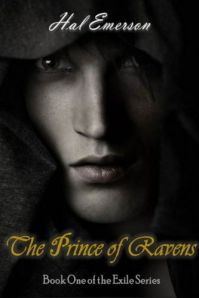 I came to this book without reading anything by Emerson before. It won’t be the last book I read by him. I finished Prince of Ravens, Book One of the Exile Series, last night around two in the morning. Had to finish it! So there’s the first book of the list I published back on January 1st of this year.

The Prince of Raven is based around the Prince of Ravens himself, the seventh son of the Empress. On his seventeenth birthday, he receives a rare summons from his Mother, one which he never answers. In a single hour, his entire world changes, the foundational principles that governed his life are challenged and he is faced with basic questions about his existence.

The plot hangs together completely, no wholes or questions that left me doubting the validity of the story. I had questions and curiosities and even at the end, Emerson surprised and made me grin as something new was revealed as he answered those questions and left me reaching for the second book in the series. I read the first 40 percent of the book around a chapter or two at a time. By the time I reached the forty-eight percent mark, I entered a long reading streak and finished before I fell asleep last night. I had to know what would happen. I was on the edge of my futon, cheering and trembling to find out what would happen next.

The world building felt strong. The reader has a clear sense of where they stand in the landscape without much expostulation. It slides easily into the story. The Empire itself feels fantastic. It’s not a world that’s possible in ours and has a rigid set up. I actually enjoyed it. Personally, I don’t need my landscapes to feel realistic. As long as they are explained, fit the rules of the world and have a good mythology behind it, I’m happy. Emerson keeps his own rules very well and explains the world as much as was necessary for this book.  Curious to know more in the next installment.

The characters are dynamic, complex and beautifully flawed. They have real struggles, personal conflicts and actually have to contend with their past trauma instead of walking away from it blithely. I came to care very much for several of them.

I would like to know more about the world and the history. Considering how Emerson tied up the ending in Prince of Ravens, I expect Prince of Exiles will have to provide some of that. If he does that, then I expect we have the beginning of a strong fantasy series.

Go check it out. Prince of Ravens is currently free on Amazon, which is why I picked it up without knowing anything about Hal Emerson. And I suppose I have another entry for my Black Avians, if I want to update my list of Black Avians in fantasy.

1 Response to Prince of Ravens by Hal Emerson