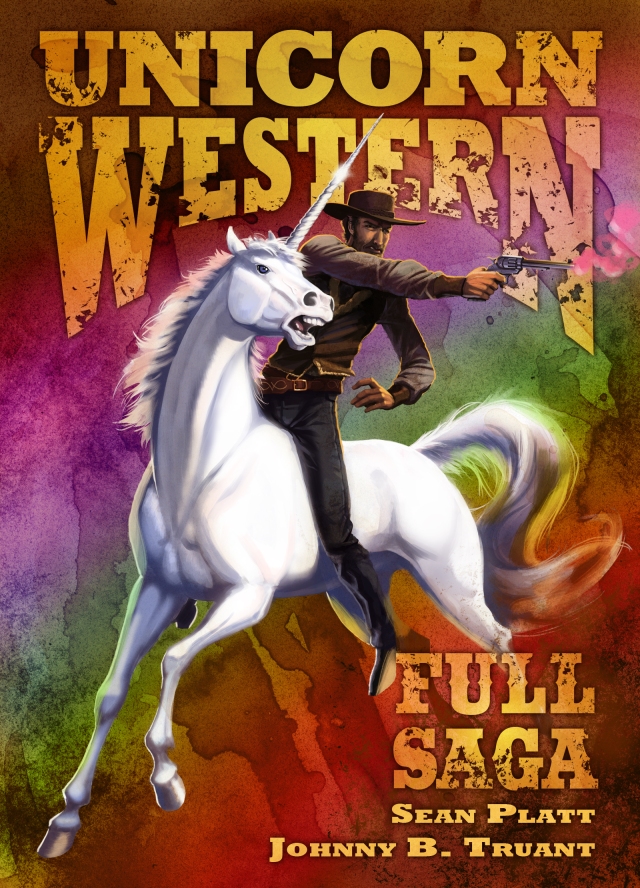 I just finished reading Unicorn Western Full Saga. Whew! Ok. How do I start? Did I enjoy? Yes! Was is whacky as all get out? Yes! Did it work? Beautifully.

After looking at the cover, I was not expecting anything more than a rollicking good read with plenty of laughs and a certain Unicorn named Edward throwing his snarky white hindquarters around to the frustration of his rider Clint, a sand weathered marshal with partial amnesia. After all, I had read the first episode, so I had an idea. Where I ended up still had plenty of snark but somewhere along the line Edward and Clint plowed their way into my hard along with Mai, Sly, a skinny kid with dreams and even a few characters that I was dead set to hate at the start. And the story took a turn towards some seriously gripping episodes.

Telling more would probably ruin the fun for you. I’ll put it this way, Johnny and Sean were ridiculously right when they said a unicorn in a western was an “awesome stupid” idea.

If you enjoy Star Wars, Blazing Saddles or Terry Pratchett books, you might just end up falling in love with this.

If you want to know more about this book or the authors you can visit their website.